Westray, “Queen o’ the Isles”, is the most north westerly island of the Orkney archipelago, and has a vibrant community and maritime industry.

Westray, “Queen o’ the Isles”, is the most north westerly island of the Orkney archipelago, and has a vibrant community and maritime industry. The island is around 16 km long and 6 km across at its widest, and its coastlines include sheer cliffs, low-lying rock shelves and sandy bays. The west coast of the island bears the full force of the North Atlantic Ocean, and waves can reach over 20 m in height as they approach the exposed headlands and cliffs. Over the millennia powerful and relentless wave action, along with beating rain and cascading burns, has sculpted the rock into intricate ledges and precipitous overhangs, deep gullies, isolated stacks, caves, and towering cliffs with sheer drops.

The Noup Head cliffs (“noup” is Old Norse for steep headland) on the most north westerly tip of Westray rise up to 76 m above the sea and are home to one of the largest seabird colonies in Orkney. Thousands of seabirds nest upon every rock ledge and crevice, creating a cacophony of sound (and a very distinctive aroma) around the cliffs from May onwards each year. Every nesting species has a distinctive local name: gannets (“solan goose”), puffins (“tammie norrie”), kittiwakes (“wekko”), fulmars (“mallimack”), Arctic skua (“scootie allan”), razorbills (“coulter neb”) and guillemots (“aak”, also the Orkney nickname for Westray people). Grey seals rest on shelving rocks near the base of the cliffs, and dolphins, orca, or minke whales might pass by in the deeper waters offshore.

Below the frenzied nesting activity of the cliffs and the wave-beaten surf zone lies a sedate and tranquil undersea rock-scape. Here, seaweeds and sea creatures compete for space, to find shelter or to harvest food from the productive waters. Every species here is a specialist and is uniquely adapted to thrive at a particular water depth, light level, and wave exposure. This ‘niche’ adaptation creates a series of subsea zones according to water depth, where one community of species transitions to another according to the environmental conditions. For example, kelp canopies dominate in shallower regions where light intensity and wave action is greatest. As the water gets deeper, kelp is replaced by smaller red seaweeds and a rich animal ‘turf’ which colonises rock surfaces. This turf might include sea anemones, sponges, sea mats, sea squirts, brittle stars, sea slugs and snails, mussels, barnacles, calcified worms and a host of other marine creatures. The diversity and beauty of these animal and seaweed communities create mesmerizing layers of surging seaweed, water and foam at the sea surface, and breath-taking walls of vivid colours reminiscent of coral reefs in deeper water.

Not all species on Westray are responding in the same way to environmental change. Over recent years some seabird populations, such as kittiwakes and Arctic skuas, have declined. At the same time numbers of other species such as gannets have increased. It is widely believed that these changes are linked to climate change, which could be affecting the amount of prey available to seabirds, and how far they must go to find it. On Westray, these changes mean that some seabirds must travel further from their nest site to find prey, making it harder for them to rear their chicks to adulthood. Many seabirds spend parts of their lives in other locations across the globe and may migrate vast distances to reach Westray. Climate-related changes could be affecting them not only in Westray, but also in the different locations they travel to throughout their life cycles.

Westray’s cliffs are teeming with life, both above and below the water. The cliffs and surrounding environments of Noup Head are locally, regionally, and nationally important, and have been designated for protection to safeguard the island’s habitats and the wildlife populations that inhabit them. While the awe-inspiring seabird colonies attract many visitors to Noup Head, there is an equally spectacular underwater world hidden just beneath the waves on Noup Head’s underwater cliffs. 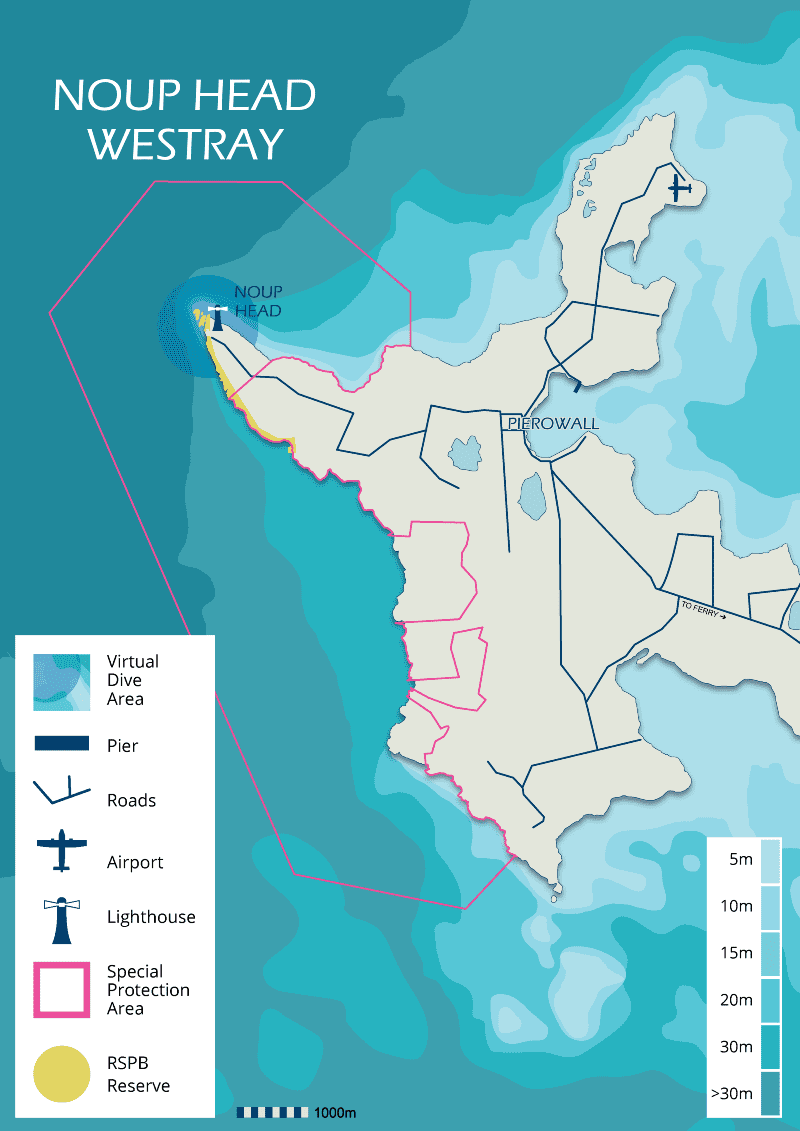 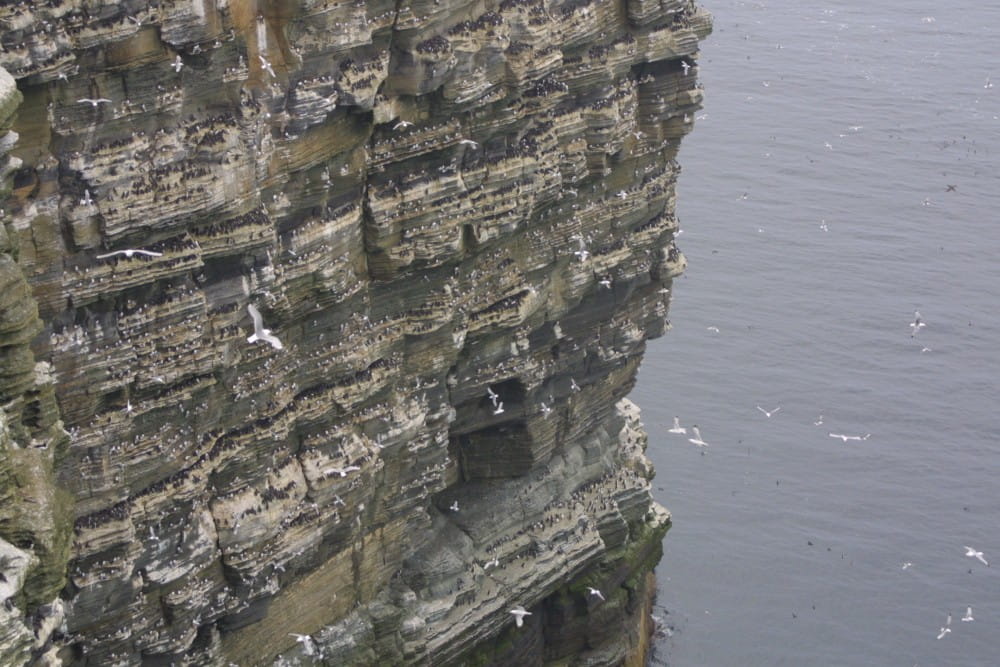 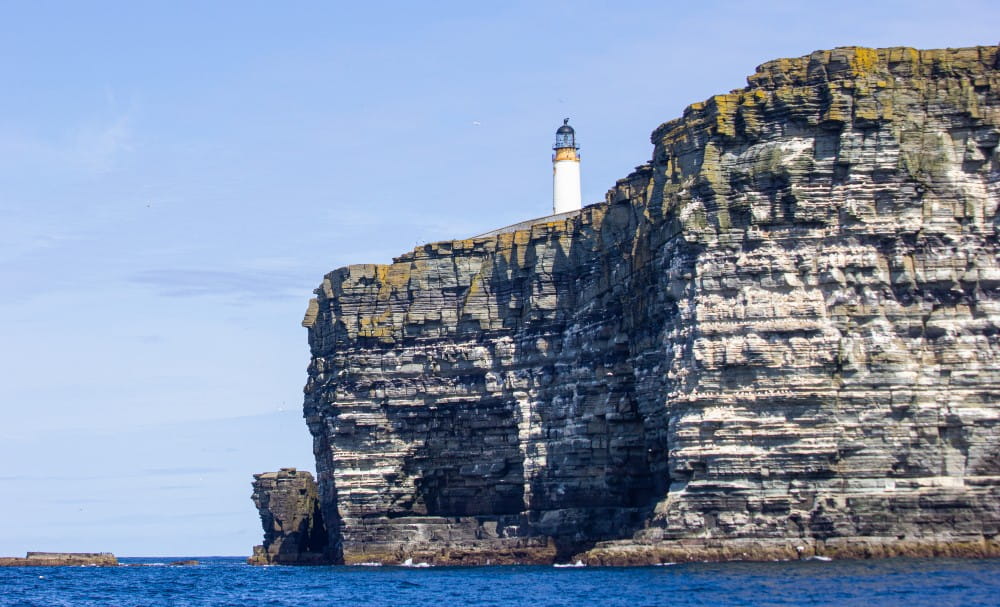 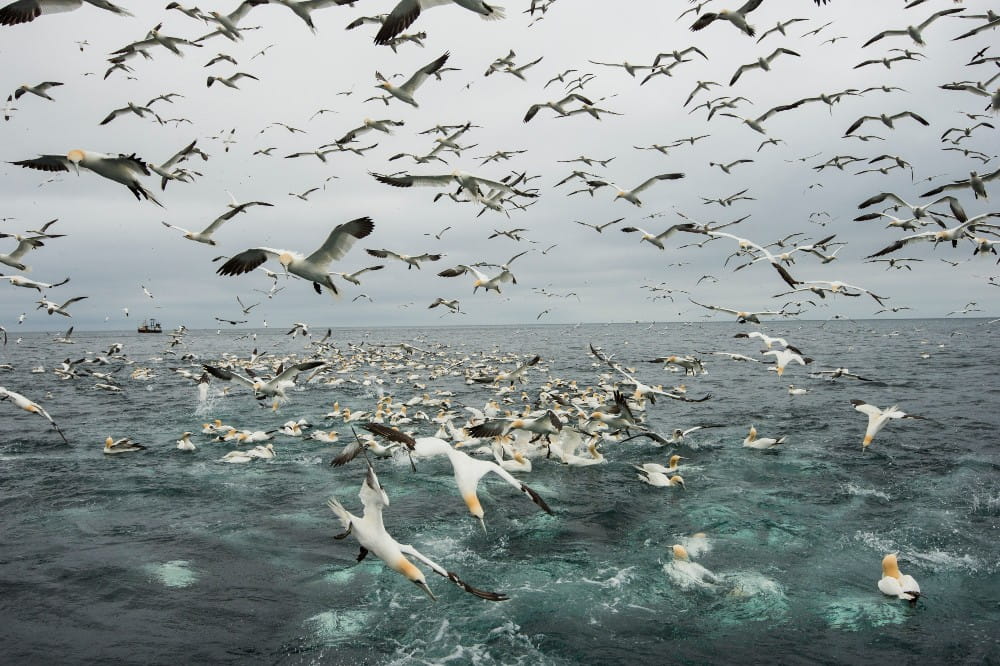 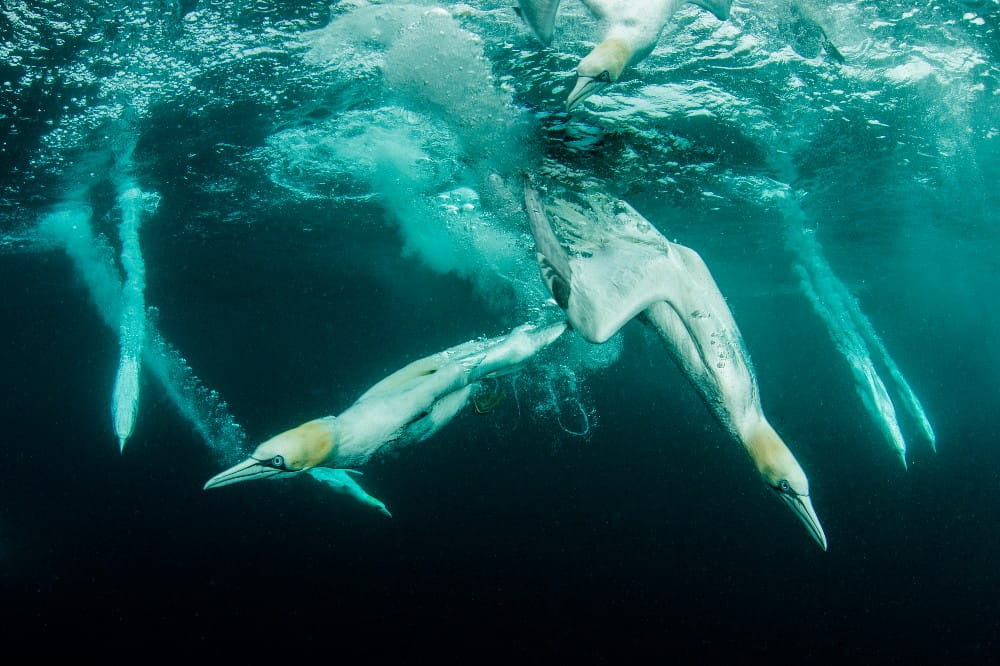 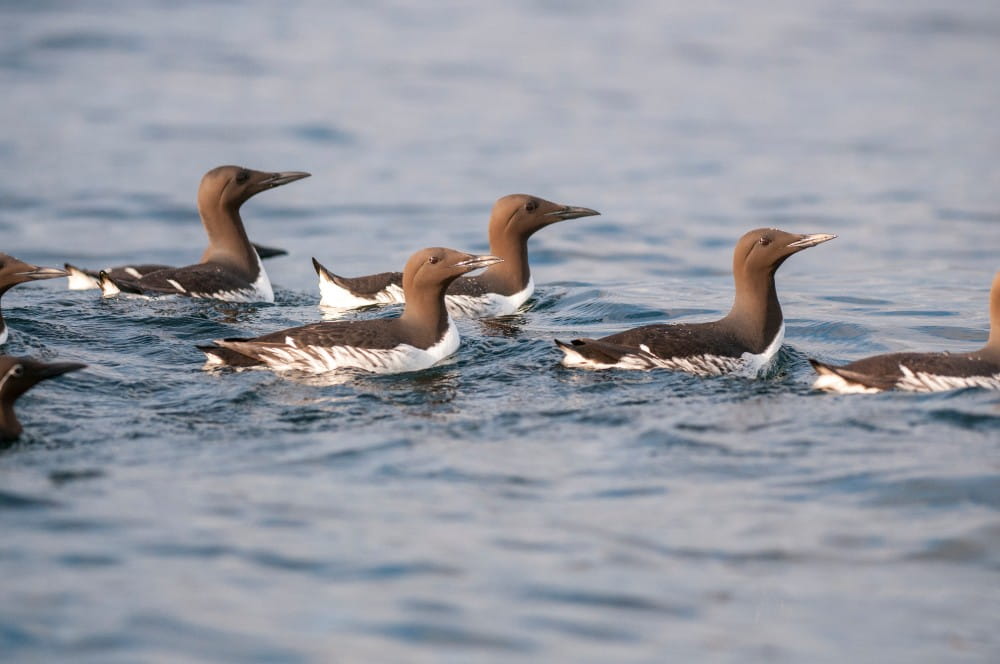 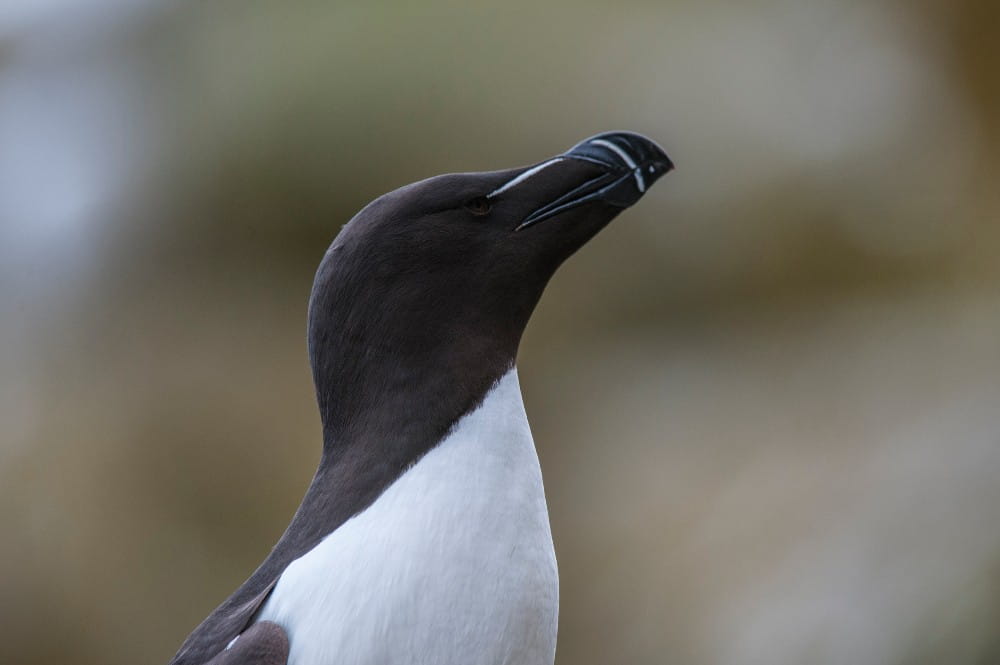 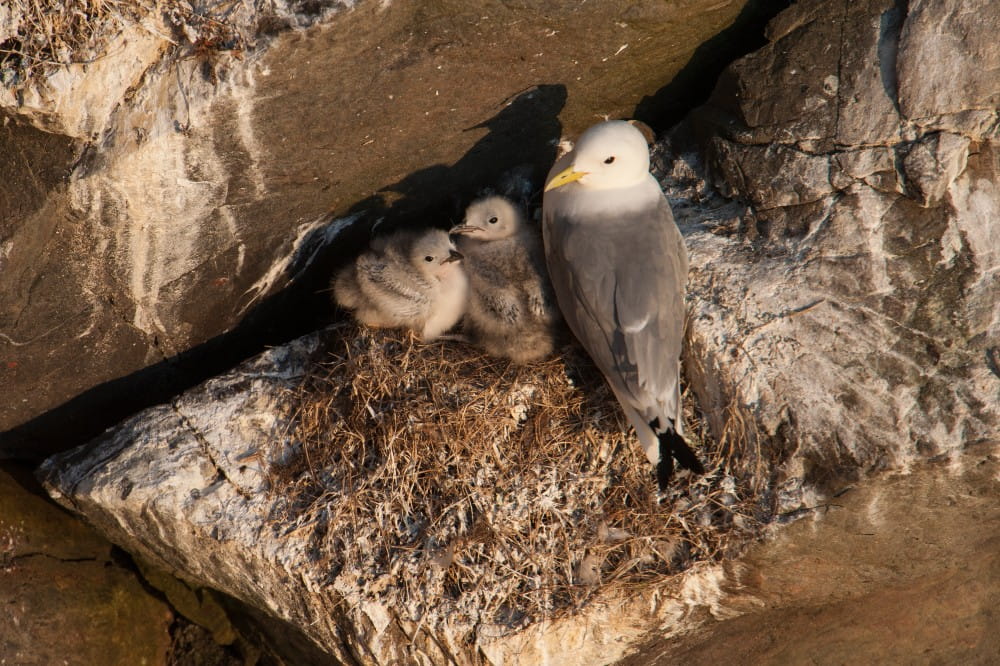 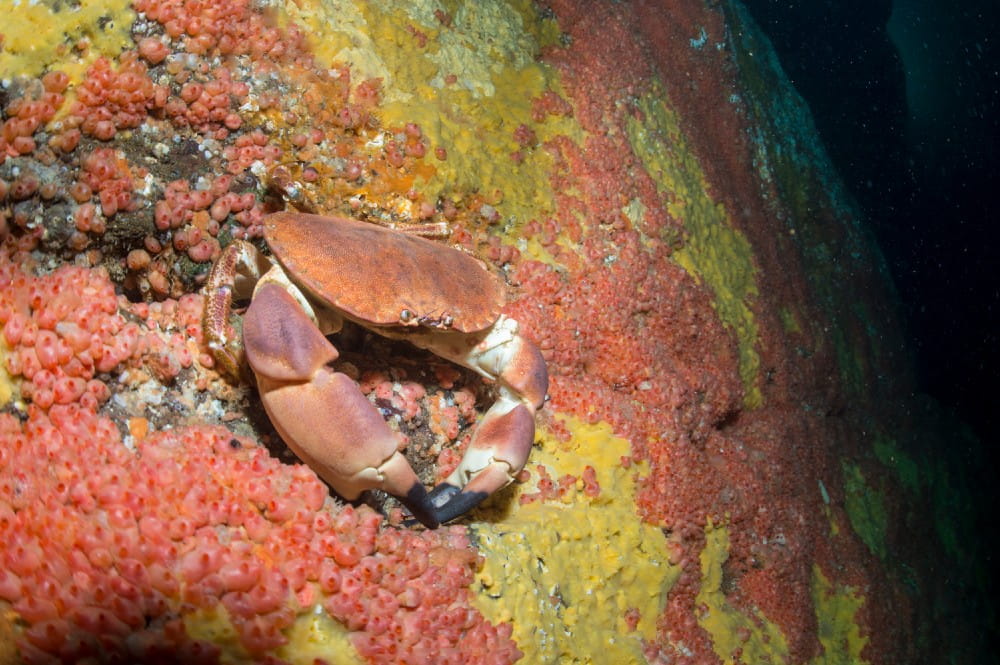 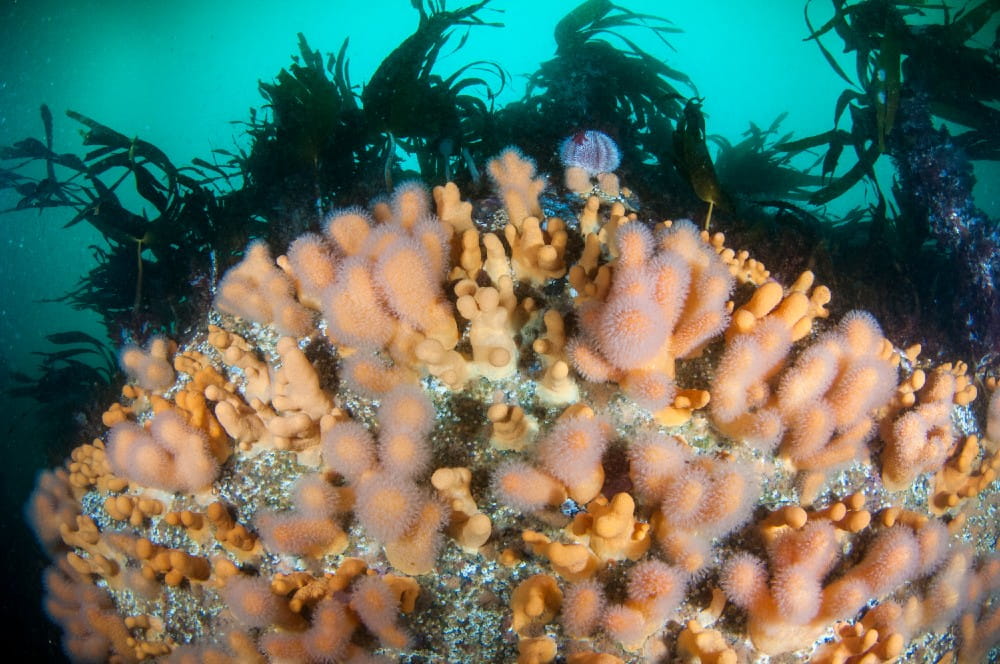 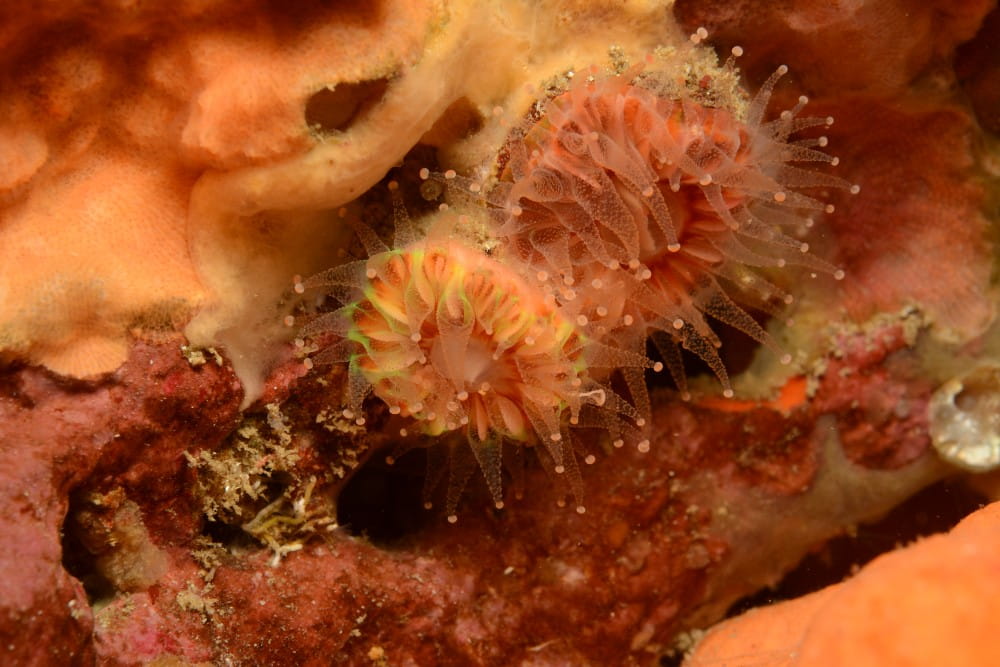 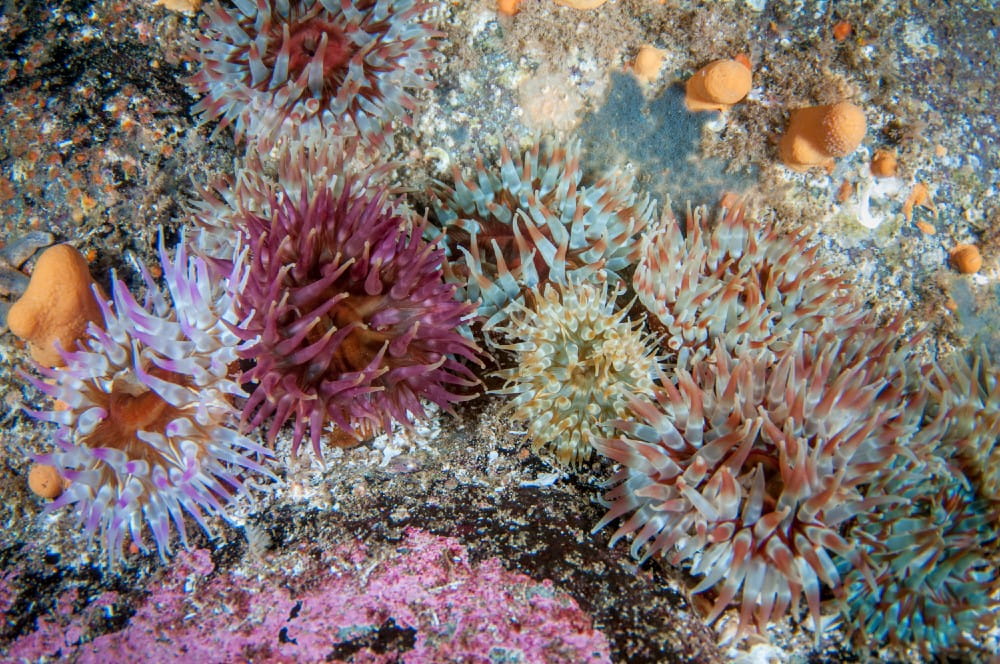