Sanday (Norse for ‘Sand-island’) was formed as sand accumulated around a group of rocky outcrops, or skerries, eventually connecting them to form a single island.

Sanday (Norse for ‘Sand-island’) was formed as sand accumulated around a group of rocky outcrops, or skerries, eventually connecting them to form a single island. At approximately 20 km long and 8 km wide, Sanday is the largest of the North Isles. It is also one of the flattest islands in Orkney. Much of Sanday is less than 10 metres above sea level, making it vulnerable to rising sea levels brought about by climate change.

Much of Sanday’s coastline has been protected, including sand dunes, saltmarsh, and machair, a habitat that is rarely found outside the Hebrides. The waters around Sanday contain important reef, sandflat and mudflat habitat, and the population of harbour seals (Phoca vitulina) that forages for food and breeds around Sanday’s coasts is of international importance. The extensive sandy and rocky shores are crucial habitat for internationally important numbers of overwintering wading birds that feed on abundant invertebrates that live amongst the banks of kelp that are washed ashore.

The shallow seas surrounding Sanday are home to extensive kelp forests that are brimming with life. Sanday’s kelp forests are mainly made up of the seaweed species Laminaria hyperborea, commonly known as tangle or cuvie. Beneath the kelp’s protective canopy of brown, palm-like fronds, red seaweeds and animals such as sea squirts and lace-like bryozoans grow on the long kelp stems or ‘stipes’. Kelp have large root-like bases, called holdfasts, anchoring them to the rocky seabed. As many as fifty different species of sea creature can live within the honeycombed structures created by densely packed holdfasts. These diverse holdfast communities most commonly include worms, brittle stars, amphipods, molluscs, anemones, sea squirts and small fish such as the eel-like butterfish.

Kelp has many valuable attributes that have been sought after and exploited for centuries. Throughout Orkney, storms regularly wash large amounts of kelp on to the shore. This beach-cast kelp was traditionally collected and dried in stone pits or on stone walls, many of which are still visible today. Kelp was used whole, as a soil improver, or burned to produce ash that was used as fertiliser on the fields. In the 18th century, island lairds across Scotland and including Orkney expanded this practice into a thriving industry, producing soda and iodine that were used for bleaching linen and in glass and soap production. Although it was a highly lucrative industry, the back-breaking work was often unprofitable for labourers, and exposed locals to pungent fumes. The time required to harvest and process kelp took workers away from their crofts, leading to poor management of nearby farmland. As new, more accessible sources of soda and iodine were discovered in the early 19th century, the kelp industry declined. Today, small-scale seaweed harvesting still takes place, and kelp is used as a plant fertiliser, for the extraction of alginates (used as gelling and emulsifying agents) and also as a human food source.

Increasing global concern about the climate emergency and record concentrations of carbon dioxide in the atmosphere have sparked interest in how carbon circulates within the ecosystem. In the marine environment, carbon is naturally stored in a number of ways. It can be buried in marine sediments, or it can be dissolved as carbon dioxide in seawater. Photosynthetic organisms such as phytoplankton, seaweeds and seagrasses capture carbon as they photosynthesize, and sea animals incorporate carbon into their flesh, shells and skeletons. Carbon is released again when animals breathe, or when they die and decompose, meaning that carbon is constantly cycling between plants, animals, seawater, and air at the sea surface. Taken together, all the carbon in the marine environment is known as ‘blue carbon’. Sanday’s vast kelp forests are a sizeable ’blue carbon' resource because of the organic carbon-based material present within the plants and animals that they are made up of. The amount of blue carbon in kelp forests changes with the seasons. It increases in the spring and summer as the kelp grows and decreases again as the kelp fronds are torn from the seabed in autumn and winter storms, only to be washed up on nearby shores. 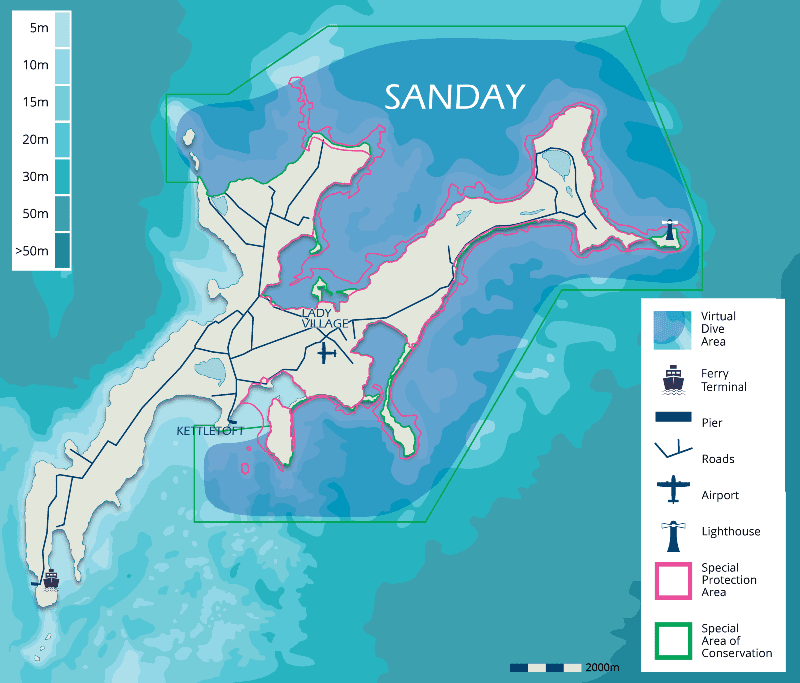 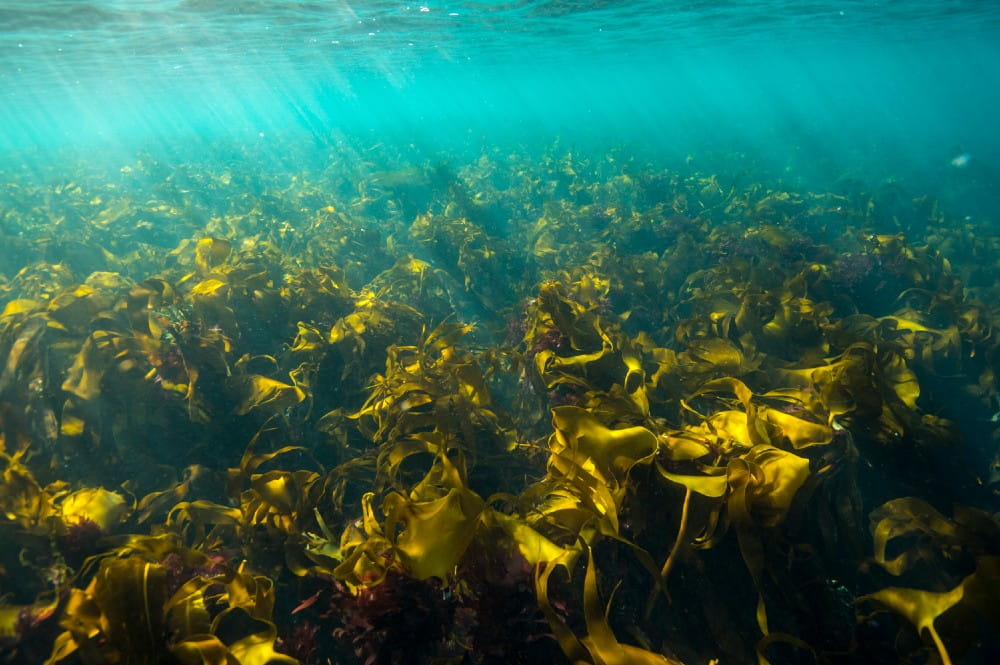 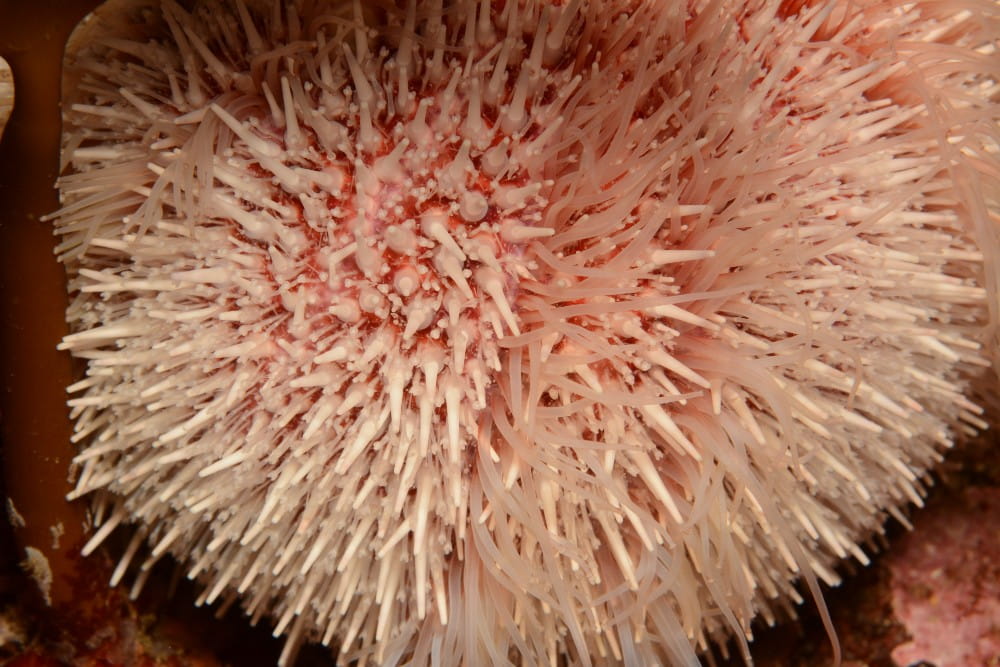 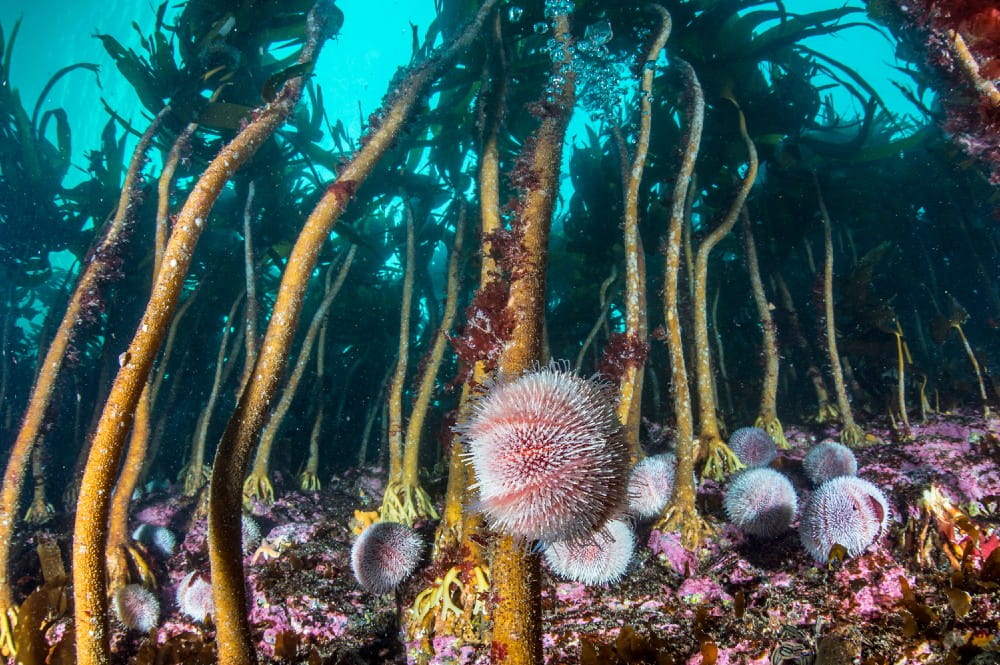 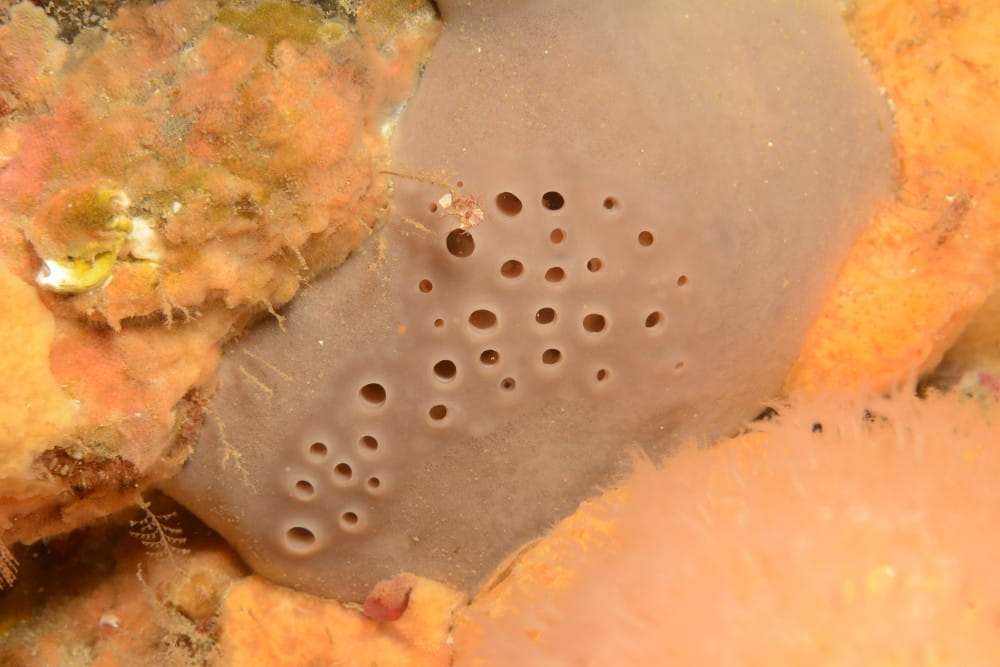 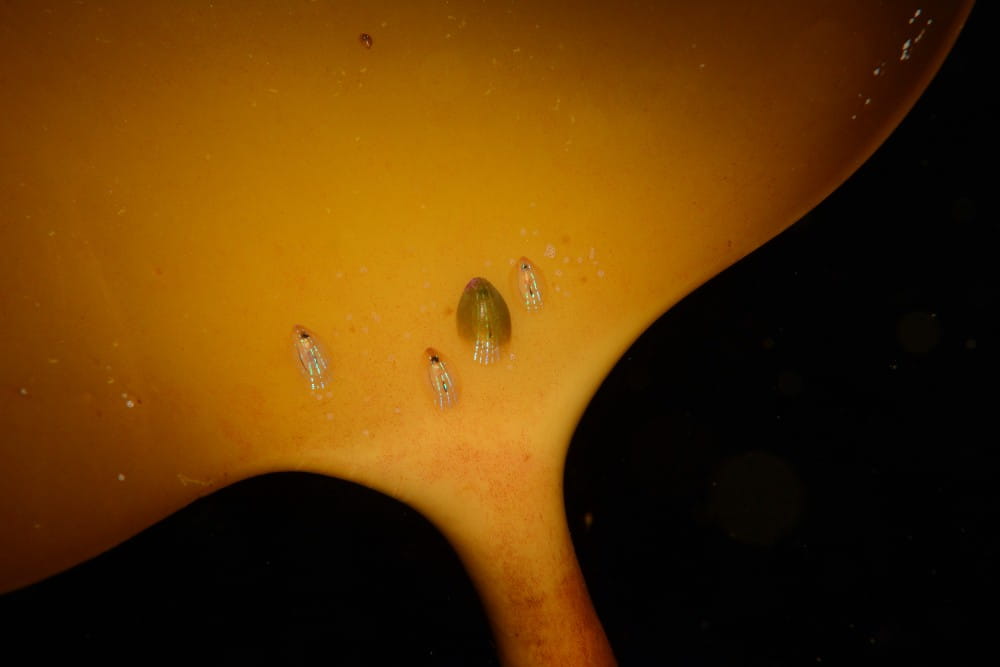 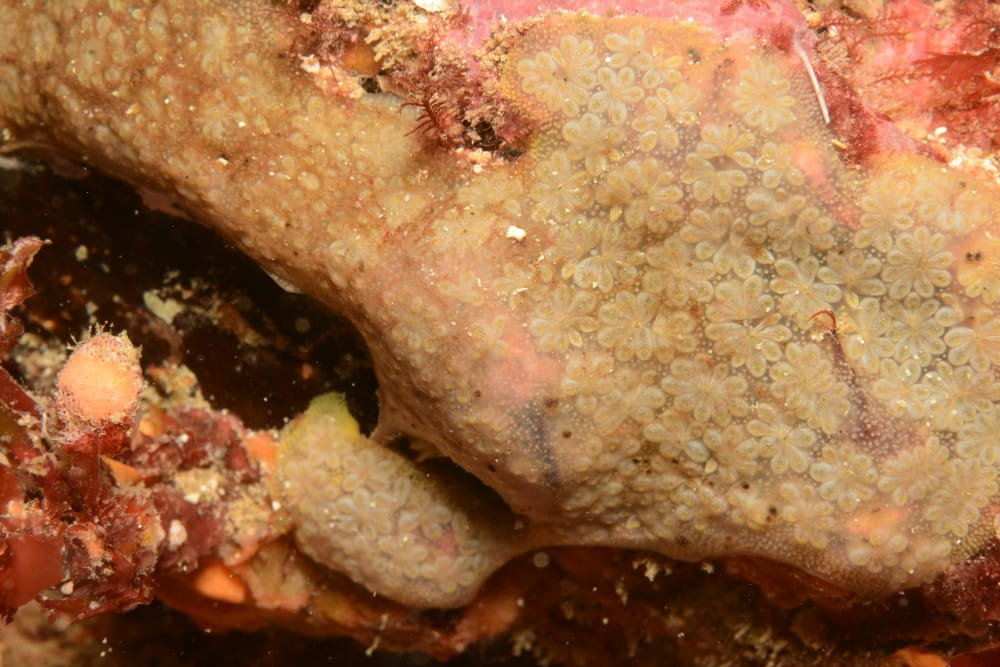 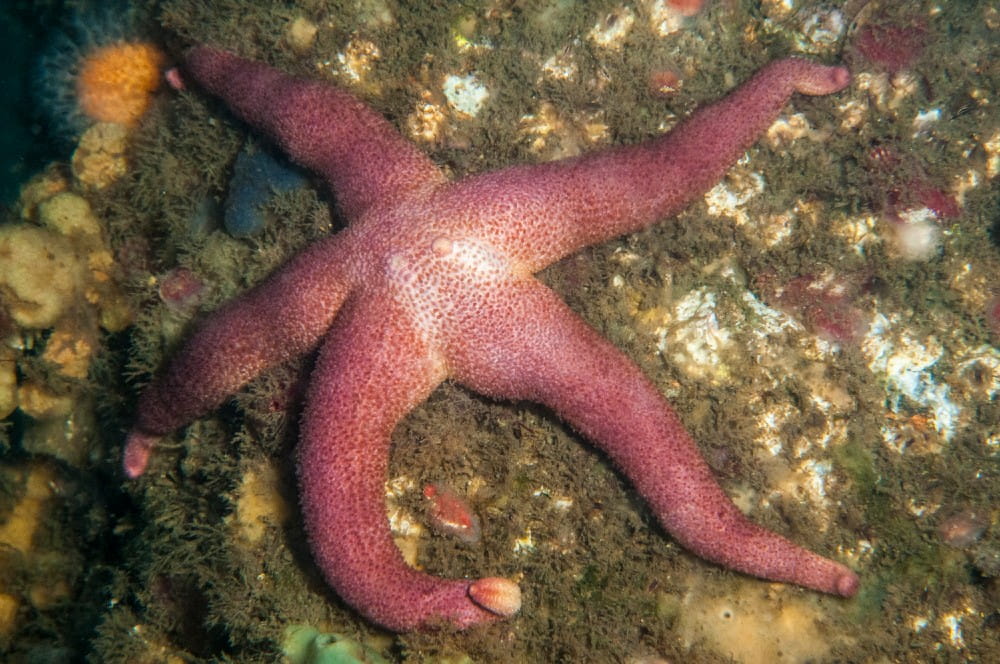 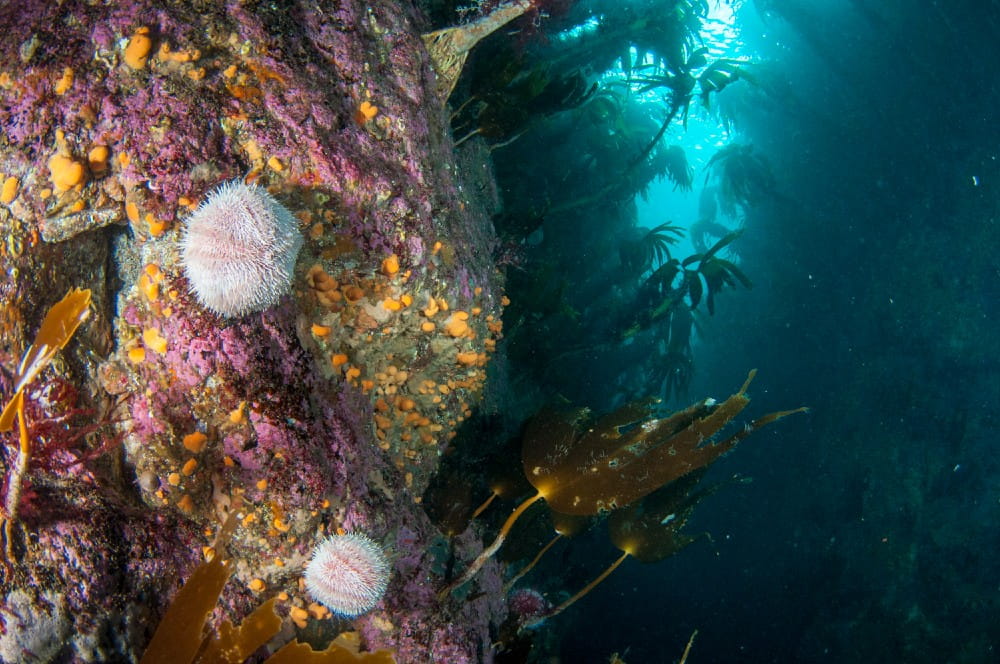 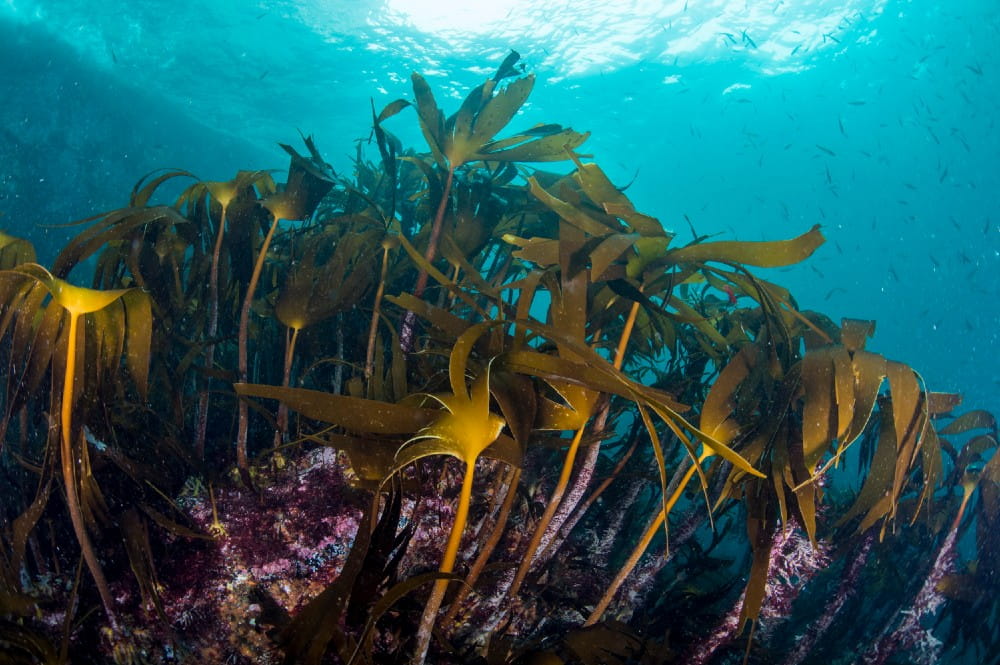